As told in my last post, I was invited to the Adobe MAX conference in San Francisco. I really had blast there. Thanks again for inviting me Mike! This blogpost only covers my personal experiences; to read more about the tracks I followed and what they were about, you're more than welcome to read the report on my company-blog.

On Saturday morning I traveled to Amsterdam and took a flight to London. From London I then had a flight to San Francisco, where I arrived on Saturday evening. Ivo told me to take the BART instead of a cab for traveling down-town; this would only cost around five bucks instead of forty for a cab. When exiting the BART, I headed over to 3rd street (I thought), but I went the wrong way. After about 10 minutes of walking and looking at street-names I finally started Google Maps from my mobile phone to look up where I was and what directions to follow to my hotel. After walking 15 minutes the other way, I arrived at the Westin, checked in and went out to get some food. Around the corner was a DelTaco, where I had some tacos, before taking a bath and going to bed.

I left the curtains open, because of the great view of the city skyline by night, from the 33rd floor, so when I woke up the next morning, I was greeted with the following view: 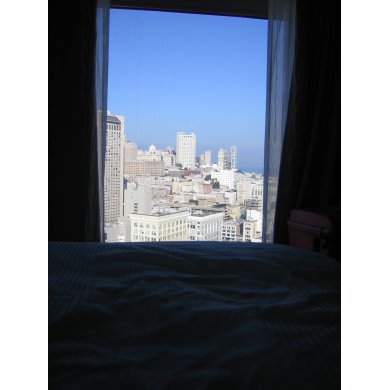 After setting up my wifi first, and later on fixed-ethernet because of the bad reception, I checked on my mail and did a web cam session with the kids. Then I went looking for something to eat. After wandering around for a couple of hours I saw a big line of waiting people in front of Mel's drive-in. This either had to mean the food was for free ;) or it was good, so I queued up. The lunch (it was that late then) was very good and the coffee was terrible. Especially if you're used to strong European coffee. Because I was around the corner of the Moscone Center, I decided to pre-register and pickup my badge and conference guide. As you can see there were only a handful of people there, so it only took 2 minutes. 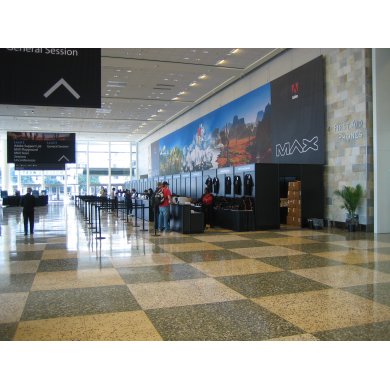 I had some time to spare, the dinner meeting was at six thirty, so I walked over to the Apple store to look at all nice toys at hand. After playing with the iPod Touch for a while, I bought one, and went back to the hotel to play with it, until it was time for dinner. We met in the lobby at six thirty and walked to restaurant Lulu, were we had a very nice dinner and conversation on who we were, what we do and what interests us, both work and private. I had some very nice talks with Zeke Koch, Adrian Ludwig, Paul Reinheimer and Larry Ullman.

Tuesday evening was reserved for the customer appreciation event, that was held in The Academy of Sciences and de Young Museum. At first Larry and I thought of skipping it, having a dinner together and then go to the hotel to get some sleep. On the way to the hotel we ran into Aaron Conran and we got into a nice conversation on the corner of 4th and mission street. After standing talking there for about an hour we decided to go with Aaron to the Customer Appreciation Event. We got on the bus around the corner of the Moscone Center, that took us to the de Young Museum. When we entered the museum, there were bars, buffets and musicians playing. We tried to get some food first, but there were only sweet desserts, so we attacked. Then we walked around and saw there were buffets with different food types scattered around. Eventually we had some very good food. It was very cool to be able to walk around in the evening, eating and drinking between old skulls and the Haute Couture from Yves Saint Laurent. Around 22:30 the museum closed and we were transported back to the Moscone Center. When we were in the bus, we passed another building, that spit out a lot of people too, we then realized that was the Academy of Sciences; we didn't even get that far. Hearing all stories and seeing the pictures of the Academy of Sciences, I felt sorry that we didn't pay a visit to that too. 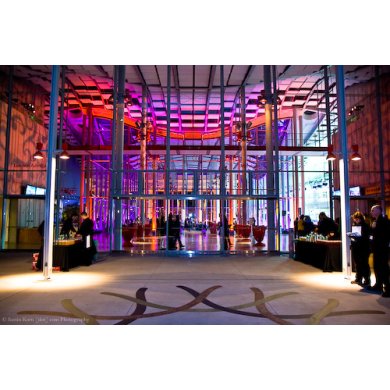 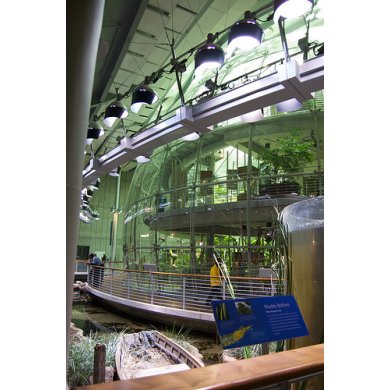 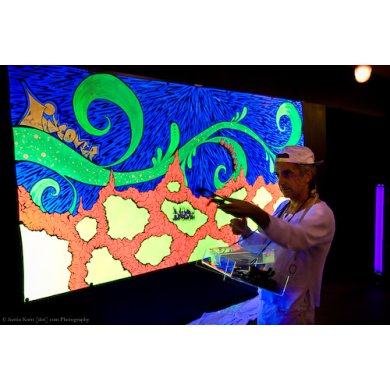 Wednesday evening, after the last session on the "next version of Flex Builder", I went back to my hotel, just to walk into Larry again. I wanted to have a dinner and Larry could use a bite before taking his plane too, so we wandered a bit around the financial district, until we found a nice thai restaurant. We had some very good food there, before we walked back to the hotel. On our way back we had a nice coffee from Pete's. Pitty it was only half a cup, because they were closing and it was the last they had ;) . Larry left to the airport and I packed up too. I had to leave the next day at one.

On my last day in SF I got up late, packed my stuff, and went down to check out. Thanks again Mike ! That was a nice surprise! I then went back to the Apple store to return my iPod Touch; I really enjoyed it, but hated the lack of internet if no public wifi was around, so I decided to get an iPhone instead! With that taken care of, I could use some food before having a trip that would take almost 25 hours, so I checked out the hotel restaurant. They had some expensive pasta, that turned out to be very small portion, but at least it tasted good. I took the BART back to SFO and left SF with a temperature of 15°C. When I arrived home it was 16°C colder... brrr

As told on my company blog: It was an awesome experience and I've learned a lot. I've learned lots of new stuff on AIR and FLEX and I've learned it's wise to not over-plan your schedule, but leave some holes in which you can socialize and network or just write up some of the things you need to remember for blog-posts like this.